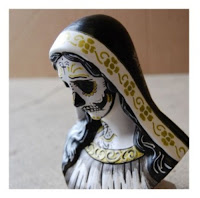 My brother and his wife recently asked me to be the Godmother for their son. My nephew is thirteen years old so I figured I'd go ahead and agree to it. Had he been thirteen months old, I might have said no. Because if something should happen to my brother and his wife, the Godmother is expected to sort of step in and do something, right? Well, my days of dealing with babies are long gone. I always say that you'll know I'm pregnant again because I'll be on the six o'clock news.
This just in ... a clearly unstable woman has reportedly jumped to her death from the Golden Gate Bridge. Early reports indicate the woman, who was wearing nothing but anchor chains and a t-shirt that read "No More Fucking Babies!!!" was seen swilling vodka and babbling something about overactive ovaries before she plunged to her death.
Because I can get pregnant using a man's toothbrush, I'm super cautious. I don't even walk down the baby aisle at Target anymore. Too risky. But thirteen years old, I've handled that age bracket before. Unless his descent into puberty turns him into a hormonally unbalanced and always hungry and unhappy beast. In which case it's off to military school. Hope his parents are okay with that.
My brother began the Godmother conversation by looking at his wife, turning to me and then said, "Sit down. My wife and I have something we want to talk to you about."
Fuck. I didn't do it. I don't know nuthin' about no robbery.
"We want to know if you'll be Junior's Godmother."
Wheeeew.
"Sure. I can do that."
And then of course, Whore Mouth (aka my mom) has to chime in.
"Maybe you should ask her if she believes in God."
*crickets*
My brother looks to his wife. Blink. Looks to me. Blink, blink. Looks to his wife.
"You don't believe in God?"
This is serious business. My brother prides himself on a few things, two of them are being Irish and being Catholic.
"Ummm, well, it's not like I'm a heretic or anything. I more of a spiritual person. It's true, I don't go to church because if there is a God, I'm sure it won't matter to him where I am on Sundays and I like to cook on Sundays. And then there's the whole religion versus science argument, you know?"
I shoot a look to Whore Mouth indicating that she'll be sent to sleep under the stairs tonight. I consider purchasing a large kennel. Maybe visit the local sex shop for a human muzzle.
My brother seems okay with this answer and then tells me that there might be classes I have to take.
What the hell? Since when do Godparents have to take classes? Is there a test? A background check to verify my Catholicism? Are they going to submerge me in water ... if I sink I'm okay and if I float I'm a witch? Will I have to "out" other heathens like that Whore Mouth mother of mine? Because she's the first name I'm giving up.
Jesus Christ, what if they stumble upon my little blog here where I've written about Virgin Mary dildos and other topics sure to cast a doubt as to whether or not I'm fit for the title, Godmother. But shouldn't that be considered nothing more than enthusiasm? Ughh, then there's the picture I posted of a nun in latex wearing a gas mask. That counts as religious art, right? God, what about that hot summer day when that woman (dressed in wool in the middle of a heat wave) confronted me and The Boy and told me that Jesus Christ wouldn't approve of me showing my skin to all of the world like a harlot and that I should save myself for my husband. I politely told the woman that Jesus also probably didn't want me to die from heat stroke and that she could kindly fuck off.
I blame all of this on my mother.
Later in the day, I put my devotion to the Catholic faith on display by showing my brother the large iron cross hanging in my hallway. It's parked right next to some of my personal artwork depicting dancing skeletons, astrological markings and Day of the Dead symbology.
He casts me a weary glance, shakes his Irish Catholic head and walks away, clearly concerned for my soul and maybe doubting this whole Godmother thing.
Whore Mouth is in the kitchen doing whatever it is that Whore Mouths do when I walk up behind her and whisper in her ear, "It's the thumbscrews for you tonight, wench."
Isn't that what any good Catholic would say?
Posted by Miss Spoken at 10:01 AM

Email ThisBlogThis!Share to TwitterShare to FacebookShare to Pinterest
Labels: Whore Mouth, Why I'm Going to Hell

I miss you sooo terribly when you're gone. It seems like ages since you threatened me with thumb screws.

LMAO. I would so totally fail that little test. I'm with you. More of an agnostic theist. It's not that I don't want to believe, I just need some proof first.

I'm sure their version of "The Godmother" doesn't involve him "saying hello to your little friend" or teaching him how to kneecap people. I'd still use the voice though. And maybe call him Guido. ;-)

The way I see it, you have a big metal cross. If nothing else, it can be used as a weapon to protect his child should need arise.

People are so picky sometimes. Shit.

@Elly Lou - I haven't forgotten your love of the Dunking Stool either.

@Wicked - Thank you for acknowledging my mother.

@Forgotten - When I say hello to my little friend it has nothing to do with God. I'm sure my brother would appreciate me not sharing that with his kid.

@Keeping You Awake - I know, right? Where is the love?

just discovered your blog. and i'm glad it was this post! i love that you refer to your mom as whore mouth. that's beautiful.

will you be my godmother? i need a good one cuz i have a whore mouth mother too.

I feel the same way. My God doesn't care where I am on sundays as long as there is a bloody mary in the picture he's fine with me.

Meg at the Members Lounge said...

Trust me, all us non practicing Catholic godmothers break out in sweat at the thought of passing a test. I think you really just have to show up; anyway, your cross has you covered!

Shit, I finally just read this..... Wow, I am a BAD God Father. I wonder what class or test Seltar would have put me through had he known there was one. Although, thinking about it now, he put me through test after test my whole life. So maybe I have always been ready for the job...

Welcome to being a God Parent! I am glad Danny asked you.... it is a big deal. I mean when Sel TOLD me I was Max and Harlowe's God Father I never expected him not to be here. You take it for granted... then when something like this happens, you sit and ask yourself... "what does this all mean"? "What am I supposed to do now"? "How can I make sure I make good on my promise"? All I can say it is a lot less hard than being the actual parent. As you know I don't have babies yet, so I don't know the protical. But GOD knows I am trying and the love I have for your kids and for Sasha goes beyond what words could possibly describe.

Why does Whore Mouth always have to jump in to get you in trouble? Ha Ha..... I called on Sunday, but couldn't get through. I will try again this coming Sunday.