Vibrators and Snow Storms: A Day In the Life of Miss Spoken

It's about eleven o'clock on Saturday night. My brother will start the process of being released from the California State Penitentiary in roughly five hours. He's been locked up for nearly thirteen years but these last five hours are like the last two minutes of a basketball game. It's taking forever.
But I'm tired and I'm going to bed and I should fall asleep pretty quickly except that Legal is crashing with me tonight and she's a heavy breather. It's like being spooned by an asthmatic bear that wants to talk and giggle all night. I'm expecting to fall asleep as soon as my head hits the pillow. What I'm not expecting is for the entire bed and walls to start vibrating as soon as my ass hit the mattress.
"What the hell is that?! Is somebody mowing their goddamned lawn this late when it's fucking snowing outside?"
Legal props herself up on one elbow, cocks her head to one side and accesses the situation in a matter of seconds. She's like a bloodhound, her tenacious tracking skills are on point.
"Mom, it's your vibrator."
Oh.Good.God.
Now I have to reach between the mattress and the box spring to retrieve my little Lelo Mia which has now escalated from buzzing lawnmower to pulsating lawnmower. I finally depress the minus button long enough to turn it off and drop it under the bed so I don't roll over in the middle of the night and start this nightmare all over again.
"Mom, do you want to be alone? Is your bed clean?" She's loving every minute of this and hoping that I'm soul-crushingly embarrassed. Clearly I wasn't since I'm now sharing the story with the you and the masses, which happens to include my father-in law.
"Good night, Moon."
"Good night, Mom." 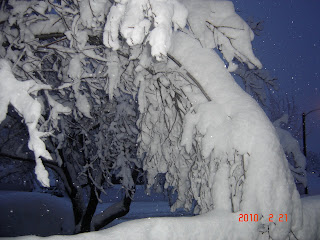 That should have been a sign of things to come because Old Man Winter proceeded to knock out my power and dropped two feet of snow around my house. Perfect conditions for traveling across a two lane mountain. The very same mountain that the Donner Party dined on their fallen and frozen companions. I've already got a contingency plan though -- granola bars. And if that fails, I know who I'm going to eat first (sorry Mom).
As we pass abandoned cars on the roads and watch other cars do 180 degree spins on the freeway, I wonder what else can go wrong. How many signs does the universe need to send me before I take the hint, turn around and take my family home? But I haven't seen my brother in over ten years so we trudge along with Johnny Boy at the wheel (again). We're only about an hour or so behind schedule when all traffic stops.
Due to multiple spin outs and weather conditions, the Highway is closed.
Closed.
And there we sit, forgetting that the headlights are on. Not paying attention to the doors opening and closing. Not minding the CD that's still playing because it's better than listening to my mother squirm (apparently her bladder is the size of a quarter) and it's better than participating in the idle chatter that has me close to exploding.
An hour and a half later and traffic starts to move. Everybody except us because our battery is dead. Of course it is.
By the time we are jumped by a CHP Officer, make our way over the mountain and take a detour thanks to Google directions, we arrive. The second leg of this trip was supposed to be picking up Miss Led and her daughter but unfortunately it was way too late.
The good news is that we all made it there and back safely. My brother looks great, as does his wife and kids. Except for not having my sister and niece there, it was perfect.
There were lots of lessons learned over the course of this adventure. One is, never put a pressure sensitive vibrator under your mattress if your daughter will be sleeping with you. Another is, Johnny Boy deserves some kind of gift for always being our steady hand (maybe wenches and beer?).
Oh.... and another lesson ...... if your highway ever closes and you're near a gas station, go pick up some coffee and Red Bulls for the truck drivers. They'll pay top dollar for some caffeine and even more for your oldest daughter. 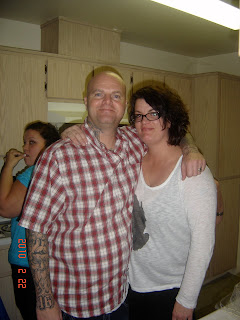 Dude that was the best story ever!!! I had to laugh outloud at work. Wow, I can't believe Danny is out. He looks great! I bet everyone is happier than hell right now!!!! Stay straight Danny!!!! I can't believe that it has been 13 years already. Damn. We are old huh?

I am glad you guys got there safe and made it home safe as well!! Ha Ha....

For some reason, I thought it was an earthquake and I was scared for you.

We've had so much snow, I have invested in Energizer. Looks like it was a good idea, not just from what is happening behind my doors.

I came to you from buggin' word who already got me into trouble at work... and then you are all talking about vibrators and stuff... I will be deported by this afternoon!

Anonymous- Yes, we ARE old. I passed on your good karma to Danny and he said to say hi and, "is she really in a band?" I'll have to bring him to a show (seriously, I promise not to flake)

Rebecca - I would have preferred an earthquake.

Wicked - Mine charges into the USB port on my Mac. Beat that ....

...and we've got nothing to be guilty of, our love...will climb any mountain near or far...we are...

I thought you needed a serenade. At least she didn't find your mother mary butt plug between her toes, right?