There is a charming little oceanside town on the California Coast just south of San Francisco. It's filled with over-priced boutiques, surfers, artists, $15 artichoke appetizers and the world's best seafood restaurant (and I'm not just saying that because my Aunt works there).
It's also a great place to build an illegal fire on the beach and smoke a little crack until you vomit and then smoke a little more. 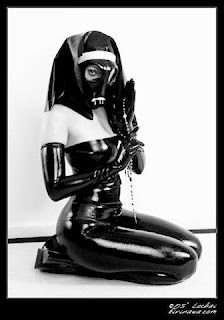 And for whatever reason, it's a place where the local teens are given nicknames that stick with them for life. It's kind of like a Catholic getting their very own confirmation name. I was never confirmed (and not just because I told my mom the holy water burned) so I never got to give myself a new name. Which is too bad because I already had a named picked out - Seraphia. Seraphia, because she was a virgin and a martyr and if you're going to pick a new name you might as well go big. That, and because I thought it would be a great name if I ever had to work the pole for a living or serve sloppy mouth hugs in the VIP room.
[Gentlemen, please put your hands together for the lovely, the virginal, the long-suffering ...Seeeraphiiiiaaaaa .....]
And I didn't grow up on the coast so my nicknames in High School were totally crappy. People still call me G, which is short for Gina. I just totally blew your mind with the originality of that one, huh? Maybe that's why I've dubbed myself Miss Spoken. Or maybe I just love the idea of an alternate personality, one that refuses to integrate. One that doesn't play well with others and sometimes stubs her vagina (not really, but I hadn't used the word vagina yet in this post and I always like to use it at least once. You're welcome.)
My late husband grew up in this town. Actually, he would clarify that he grew up in Trailer Town which is exactly what it sounds like; a community of trailer homes. Double wide, bitches. Anyhell, he went by the name Seltar and I think I dated him for several weeks before learning his real name was Richard. My sister, Miss Led, had a similar situation. She once dated a guy but could never remember his name so she just called him homey.
"I love you, Miss Led."
"Ditto, Homey."
Actually, I guess her situation wasn't the same at all. Anyway, my point is that these people have the best nicknames I have ever heard of. Names like Turkey Dinner ('cause he was as big as a turkey dinner), Puppy, Bucket, Goose Mama, Frogger and his little brother Tadpole (fucking brilliant), Clayture, ZiirroSixx (I'm sure I spelled that wrong), Jungle Brother (no, he wasn't/isn't black) and the list goes on and on.
So what'd they call you back in the day? Come with it, Innernetterz. I promise I won't tell a soul.
Posted by Miss Spoken at 12:32 PM

It's tough to get a good nickname nowadays isn't it?!? I got Jon, short for Jonathon, but never anything cooler...

@Keeping You Awake - How about I call you Crispy Nipple? Or maybe you would prefer something like Slut Muffin? Just throwin' it out there ...

Ha Ha Ha... What a subject to write about. It is true, everyone I grew up with in Trailer Town, or the general Half Moon Bay Skateboarding community, had a nickname. I will list those who are most prominent:
CJ - (The Originator), Seltar, Kibby
Bucket,G Bones,Frogger,Tadpole
Daltar, Puppy, Caboose, Stutter
Eggot, King Hoe, Bootie
Sindog or Laloon, Petticoat
Grimace, NAD or Deeskee
Flounder or Chum/Chummer, Scottishe
Watta, Orfa, Frenchy
Gorillas in the mist, Bushwick (Bill), Shlapper, Stagu
Cheeseburger,Kular
I know there are many more, even obvious ones, that I am leaving out... but still you get the picture.
We still all call each other by our nicknames as well. The fucked up thing about HMB, T-Town and Nicknames in general in that area... is that you WILL have one, and EVERYONE in town will know you by it, BUT YOU! And people are super good at keeping it from you as well. It's SO fucked up!!! I myself never got tagged with a nickname... I guess the closest would be Staysh, or at least Stace. Some really, Really close people called me "Misty (MissDee). But I can only imagine they called me Stacey Pee, (As I had a lot of animals that would shit in the house and with the last name Dee, I think it would have been the easy pickings), or it could have been something so much worse I don't even want to think about it. I have asked a few key nickname "givers" from town as to whether or not there was an unknown nickname out there for me, and each replied "NO". But again, I grew up with a bunch of assholes that I am sure to this day, would love to see me never find out the nickname the town had for me. I know that I am well known as Stacey Dee, at least I made THAT name for myself.... I reigned many years in that very very sleepy, very drug filled, gorgeous beach side town. So much so that I had to get the FUCK OUT OF There. You know when you live in those places in life where you know you've come to your end.... and it is just time to get OUT???? That is how it was for me in HMB. I still go back, all the time. It will always be my home, my past... the place that defined me and my character. It was a fun place to grow up.... It was pretty safe back then, and even though we did come from the Trailer Town... We had access to some of the coolest most private beaches in Northern California included but not limited to the infamous Mavericks! And for some reason, it was a drug taker's paradise.... Everyone was fucking launched at one point or another!
But back to nicknames....

Part 2:
Miss Spoken:
I gotta tell you how the rules of nicknaming go:
You DO NOT, I repeat, DO NOT, get to pick you own nickname! Ever, and under no circumstance!!! None of of the above mentioned people got to pick their own nickname! The only way this rule does not apply, is if you were involved in any sort of respected Hip Hop project, where if you were brave enough to go for it, you will be rewarded with getting to pick your own stage "nickname". But as far as general getting a nickname from assholes in HMB and T-Town goes.... It is not up to you! Nor, will it ever be!!! Sadly, It might be up to me to give you one. I call you "G", so maybe we will roll with that for now!
I kinda wish they had all come up with one for me back then... but at the time we were all teenagers and in a period of our lives where boys were still mean to girls. I guess if I had fallen into the typical "girl" category I would have walked away being called something horrible. But thanks to all of the above mentioned people, maybe they respected me too much to come up with something to degrade me with. Not saying that the boy's nicknames weren't all together not degrading, i.e. Bucket, Stutter etc...
So yeah, it was a very interesting childhood growing up with these people. The guys were skaters and musicians, the girls that kicked it on the regular were all friends of mine. If the lame chicks that came around didn't meet the "Stacey test", they didn't get to hang out in the Trailer Park.... Period. Known Fact.... Queen Bee of what little we had and held so dear!!!
I think maybe this is why we are all still friends after 20 to 30 years later! We kept it close, we protected each other, had each other's backs and made sure to remain in contact throughout all these years!
Like we use to say... 'All we got in this world is Comedy"!

They called me Elevator...cause I was wicked tall. Oh the hilarity.

G, I'd like to accept the nickname Crispy Nipple on behalf of KeepingYouAwake. I promise to call him that from now on.

I think you're on to something here! Man, who knew your post would result in me getting a new nickname? And so stylish. Crispy Nipple. Man, I can't wait to get it embroidered on a bowling shirt!

Elevator's right. This is the beginning of something.

@Staceyandjen - Stacey, I knew you'd come through with all the nicknames I overlooked. How could I forget G-Bones and Stutter. The Coastal Kids Creativity Cup runneth over. And just for the record, the only nickname I ever heard them call you was Stacey Dee of the Trailer Park.

@EllyLou - Don't be intimidated by Stacey .. she's the size of a Keebler elf and weighs about 20 pounds. Twenty pounds of fury, that is. Maybe I should start calling her that. Hmmmm... let me think on that

@KeepingYouAwake - I knight you Crispy Nipple!!! Your friends are going to be soooo jealous ....

My dad dubbed me Mouse when I was little because of the sound I made when I fussed while being breastfed (yeah, I said it. What?)

I had another friend who got dubbed Gravy after an embarrassing situation with her boyfriend's parent's car seat and he got dubbed Biscuits...LMAO. I still laugh at that one.

My little ones have nicknames, too. I have dubbed them Screech (because of high pitched screaming/crying) or Wee-mite (he's a little fella). His twin brother was dubbed Noggin (he has kinda a big head from having to have a shunt but it's an affectionate nickname, I promise. I give that noggin kisses everyday). My littlest one has been dubbed Grabby for now because she pulls things down and yanks on my shirt when she's hungry (yep, she's breastfed, too).

I grew up with all kinds of nicknamed friends and relatives. Guru, Batfoy, Shell, Hoolikay, Hoochie, Hooker, Mayhew, Meanass, P-nut, Beavis, etc. My mom's dogs even have nicknames from their original names. Jasmine is Jazzy or Old Lady or Granny now. Talitha is Tally or Whacker or Satan (she's a mean little bitch). Rogan is Ro-ho or Rogaine. Mika is Meek (hard to shorten that one). I had some other nicknames in school that rhymed with my real name that were mean but I won't relive those now. I guess that pretty much outs me and about half my family...lol.